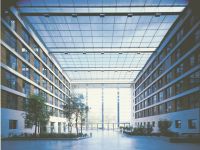 The new German Foreign Office, located in the centre of Berlin, consists of an old building and a new extension which is adapted to the proportions of the historical structure. This ensemble fuses the past and the future to create a grand visual impact and is deemed to be one of the most interesting office buildings in town.

The office complex surrounds a rectangular atrium on three sides, while the fourth side is closed off with a glazed facade rising to the full height of the building.
The glazed roof rests on a grid of six main girders running parallel to the facade. This grid supports a secondary structure, a grid of rectangles forming individual cable braced barrel vaults, on which the panels of laminated safety glass are installed.

The glazed facade has an almost invisible supporting framework of pre-stressed steel cables, some of them additionally braced by steel rods.

We use cookies on our website. Some of them are essential for the operation of the site, while others help us to improve this site and the user experience (tracking cookies). You can decide for yourself whether you want to allow cookies or not. Please note that if you reject them, you may not be able to use all the functionalities of the site.